How Do Unmarried Couples Divide Property After They Split Up? 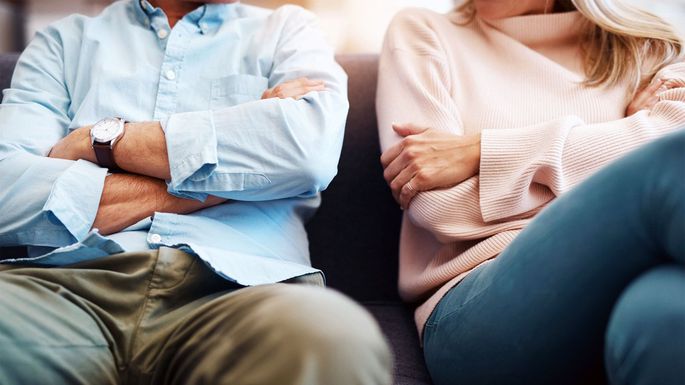 Today, 14% of Americans aged 25 to 34 live with their significant other without getting married, and many of these unhitched couples are buying homes. Which begs the question: If this merry, modern-day union goes south, how do unmarried couples divide their assets after they split up?

When those more traditional duos, aka married couples, divorce and divvy up property, the process is fairly simple (at least in legal terms), since there are laws in place to protect all parties and clear-cut rules on what's kosher‚ or not. But when you're cohabiting without tying the knot, it's a very different animal. Here's what you need to know about buying (and possibly splitting) a home with a significant other when you two haven't walked down the aisle.

How does dividing real estate assets differ for married and unmarried couples?

When married couples divorce, there are several options available to them in dividing any real estate they own. One spouse can buy the other out, they can opt for a delayed buyout, or they can sell the home and split the profit.

This decision is all mediated by divorce court, and, notably, the court can force the sale of the house if the (soon-to-be ex) couple can't agree on what to do with it. This is so that if one party is desperate to sell (to, say, buy a home elsewhere) or buy the other party out (so that one of them can stay put as sole owner), the courts can make that happen.

With unmarried homeowners, however, the courts' hands are tied: In most states, provided both unmarried partners have equal legal ownership—meaning both of their names are on the title to the property, no matter how much either party contributed to the purchase of the home—bothmust agree to sell the place before it's put on the market.

"In a divorce case, the court will [force the sale of] the house—no problem," explains David Matthews, a partner with Weinberg Wheeler Hudgins Gunn & Dial in Georgia. "With unmarried couples, you’d have a hard time. You could never force the other side to buy you out. If one party wants to be really obstinate and not sell, the other party has a problem."

Plus, even if an unmarried partner does agree to a buyout of the other, the cost of doing so is more expensive than it would be for a married couple doing the same thing.

"Transfers of assets between the parties in a judgment of divorce are tax free," says Lynne Strober, the co-chair of the Matrimonial and Family Law practice at Mandelbaum Salsburg in New Jersey. "This means that if one spouse transfers their interest in the property to the other party, there is no tax consequence. However, if there is a buyout between an unmarried couple, tax issues may arise, as the transfer may be a taxable event."

This means unmarried couples should talk to an accountant about how much they'll pay in taxes when transferring assets, so they aren't blindsided by the costs.

What can unmarried couples do to protect themselves if they're buying a house together?

Due to the legal complications noted above, numerous experts agree that unmarried couples (whether they are romantically involved or business partners) need to have an agreement in writing before they buy a home together. This is the only real way to protect yourself and make sure the property is divided fairly and without issue in the event of a breakup.

"When unmarried couples buy a home together, they can't do it on a handshake," says Matthews. "Because in almost every state, if you have an agreement regarding real estate, it has to be in writing. It doesn’t have to be a 40-page formal document drafted by a professional lawyer, just an agreement about how things are going to be divided."

These contracts, sometimes known as "cohabitation agreements," should cover these things at a minimum:

What happens if couples don't have a cohabitation agreement?

If an unmarried couple buys a home without a written agreement in place and splits in a less than amicable fashion, they could be in for a lengthy and expensive legal battle if they can't reach an agreement about the property on their own.

Both Matthews and Walzer agree that the legal fees associated with litigating issues of ownership or equity in the home would be likely to run to at least $25,000—and could tally up in the hundreds of thousands, often well above the value of the home itself.

"I’ll say this: It’s a whole lot cheaper to hire a lawyer to write up an agreement before you buy a house than it is to litigate it later on: A stitch in time saves nine," says Matthews. "There’s no way to predict legal fees, but I don’t see any way you could even get the ball rolling for less than $25,000 to $50,000."

Of course, bringing up the idea of a contract that's specifically meant to protect you in the event of a breakup is a delicate matter. Experts say that many couples fail to get anything in writing because they are reluctant even to broach the subject. But it's vital.

"When people get together like this, they don’t want to put it in writing, because it’s awkward. It’s hard on the relationship. It’s like getting someone to sign a prenup," Matthews says. He feels, though, that it’s crucial that they take the time, put it in writing, and sign an agreement. "Preferably have it witnessed. Map out how things are going to be done, and who owns what."

For ADA assistance, please email compliance@placester.com. If you experience difficulty in accessing any part of this website, email us, and we will work with you to provide the information you seek through an alternate communication method.

Sign Up
Already a User? Sign In
You have been successfully registered
Please check your email.
Go to the homepage
Sorry something went wrong
Please try again.
Try again